Temple University has $450 million of construction projects under way as it works to chip away at its ambitious Temple 2020 master plan that will recast its North Broad Street campus.

The school started to make headway on Temple 2020 in January 2009 when its trustees signed off on the plan, and now, nearly four years into it, a third of the overall $1.2 billion work of projects has started to rise out of the ground and materialize.

The largest of those projects under construstion is a $216 miollion student housing complex on Broad Street and Cecil B. Moore Avenue. It includes a 27-story structure and a seven -story building that will total 660,000 square feet. The project will accommmodate 1,275 beds and is on schedule to be complete by next summer. The design includes a third, three-story building for dining, rerail and other community spaces.

The school has 12,000 students residing on campus and wants to add over the next several years enough beds to accommodate 16,000 and 20,000 undergraduates and bring more students onto theh campus.

Called the Mitchell and Hilarie Morgan Hall, the residential building towers over Broad Street, making a statement about the school.s presence and sommitment to North Broad.

Temple 2020 seeks to reshaped the urban campus and attempt to reinvigorate the North Broad and re-establish the artery as the gateway to the campus. Once completed, the plan will create amore green areas and acadeic cpace, develop additional campus housing and ln theh core of the main campus to North Broad. 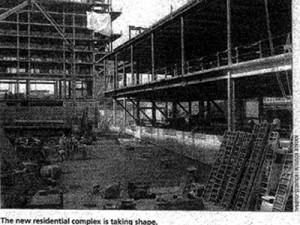 Temple 2020 is intended to upgrade facilities for the existing undergraduate and graduate propulation, capped a a maximum of 37,000, and enable it to catch up with the growth the school has experienced over the past decade.

Work on the Temple 2020 plan is a little ahead of schedule because of the mild winter weather, said Jame P. Creedon, Temple’s senior vice president for construction, facilities and operations. Funding hasnt been an issue. Money for the projects has been allocated and not hit any hurdles from the state, which has faced budget constraints. For exapmle, the new $12 million, 50,000 square-foot architecture building that opened in January was financed with bond funds and money from the state. The $58 million addition and revenue of Pearson-McGonigle athletic facility was funded through university reserves bond financing.

The next project to start is a $137 million science and reserarch building that will stand eseven stories and total up to 275,000 square feet. Work is expected to start this month and scheduled to be completed by spring 2014.

One of the other significant projects to get going is a new library. After taking assessment, planners determined that redeveloping the existing Paley Library would cost more than construction a building. Moeny for the $190 million structure has been eaermarked and an architect is expected to be selected later thi smonth or early next week. No time frame has been set for when construdtion on the library will begin, Creedon Said. The design of a university library of the future is expected to take some time, he said.

“We want something taht is relevant today and relevant in 2050, ” Creedon said. “This is something that will be unique nt only in form but in function.”

The library will go on an existing surface parking lot adjacent to the newly redevloped Pearson-McGonigle recreation facility on North Broad.

Temple is also in the early planning stages of how it intends to address the law school and redevelop it. The school was constructed in the 1970s and is dated inside and out. Whatever is done will include repositioning it.

“We want to give a different presence on Broad Street'” Creedon said.